Recently I decided to take a stroll through Penn Center Suburban Station here in Philly and browse through the shops. There I discovered the CeCe Boutique. To be honest, I’m sure I’ve passed by many times before in my way to work but had never been inside.

However, this time the most beautiful skirts and wraps were visible from the window and I just had to stop. Today’s look features one of the two sets I purchased that day. Ankara designs are made using an Indonesian dye technique called batik on which cotton is waxed in such a way that the colors don’t spread across the entire fabric.

This creates the beautiful designs we see. This process, although developed in Indonesia and used by the Dutch, was made wildly popular in West Africa where the style eventually became exclusively associated with that region. 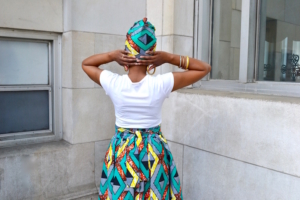 While many have begun wearing Ankara and other African inspired clothing as trendy, I pause before wearing anything of serious cultural importance unless I have a clear understanding of the ceremonial garb. These designs however,  are made to be globally shared.

I must say I’ve fallen in love with this style of dress. I especially like that the headwrap doubles as a bandeau top, which is perfect for our summer heat waves and trips to the beach. So how about you, have you worn Ankara fabric? If so, how are you styling yours?