Written by Shakira on January 29, 2016. Posted in Personal Style, Style. Leave a Comment 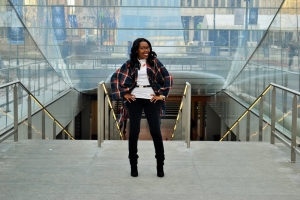 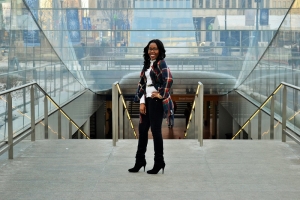 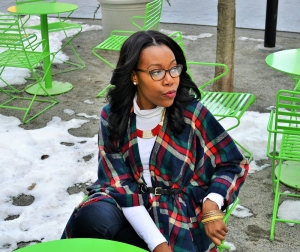 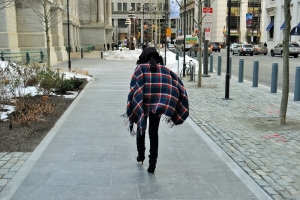 Normally I’m surprised at how fast the weekend arrives but this week I found myself counting down the days. It’s been one of those weeks and I can’t speak for you but I’m most definitely looking forward to sleeping in late tomorrow!

In the meantime I’ve decided to change scenery a bit and head to Dilworth Park at City Hall. Today’s look is all about this beautiful plaid blanket scarf, one of my favorite wardrobe pieces from Uniqlo. In fact, my entire ensemble is courtesy of Uniqlo. I have to say they’ve become my go to place for warm winter apparel. It’s a Godsend for someone anemic like myself. Well, cheers to the weekend loves, I hope this week has been a blessed one. Stay warm! XO

Written by Shakira on January 25, 2016. Posted in Personal Style, Style. Leave a Comment 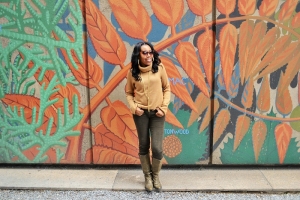 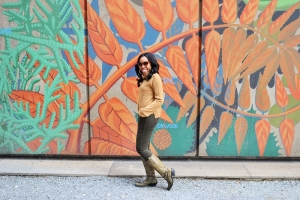 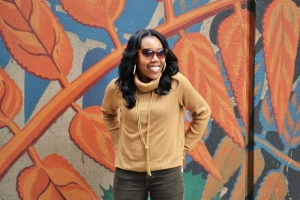 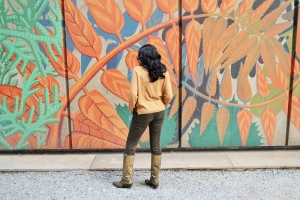 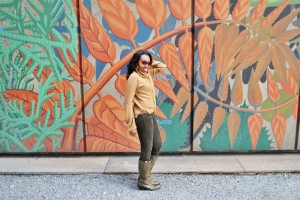 This winter I’m trying something new, a lace front wig. I seldom have the patience to sit long enough for braids or sew in weaves so wigs are my go to protective style. I’ve been wearing this unit for about a week and I’m loving the look. The lace itself can be scratchy if you don’t cut it off well enough but overall I’m impressed. Prepared to see this wig until Spring arrives. No, seriously. As for the rest of today’s look it’s all about these olive corduroys. I love this shade of green on my complexion! I’ve decided to pair them with a camel colored turtleneck and my olive cowgirl boots. This cord/turtleneck combo might just be my winter uniform… XO

Written by Shakira on January 21, 2016. Posted in Personal Style, Style. Leave a Comment 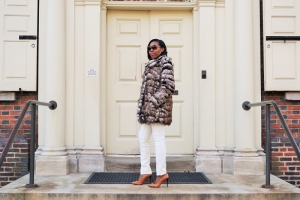 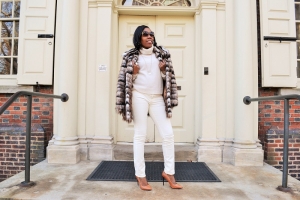 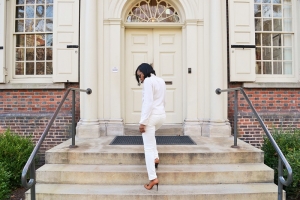 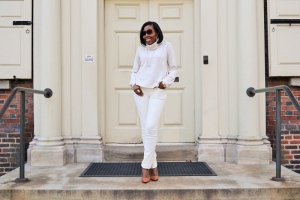 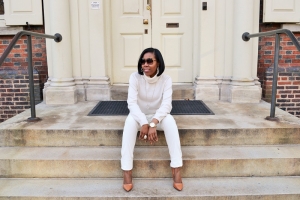 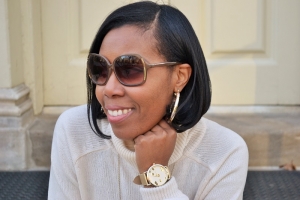 This week I’ve been browsing a few stores in town and I have to say I find myself sincerely missing Daffy’s department store. Usually this time of year I’d be finding little one of a kind gems in the sale section of the coat and shoe departments. I always managed to find dope pieces, such as this featured coat. This faux fur number from DKNY is at least 10 years old. It’s become my go to winter piece when I’m in the mood for a little drama. Today’s look is centered around this coat. Since it’s also a work day I’ve played it down by pairing it with a monochrome ensemble. Perfect way to add dimension to all over winter white! XO

Written by Shakira on January 19, 2016. Posted in Personal Style, Style. Leave a Comment 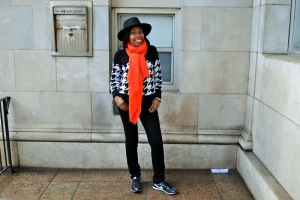 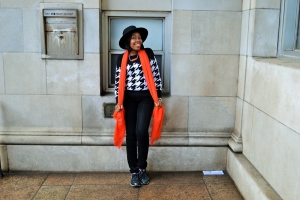 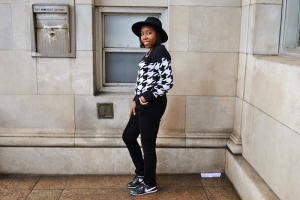 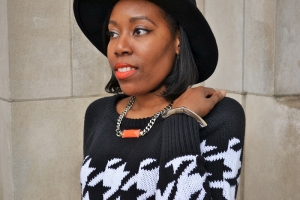 This weekend we saw a few flurries here in Philly and I have to say I was psyched! For the past four years, without fail, it has snowed on my boyfriend’s birthday. Like seriously, every single time. It’s weird but we hardly ever see snow anymore prior to the Martin Luther King Jr holiday. Now that we’re in the heart of the winter season with two more months to go, I figured I can pull out the corduroy pants. Today’s look features a fabulous sweater I found while thrifting, my comfy cords, and my even comfier Nike’s. Here’s to the start of another fabulous week! XO

Written by Shakira on January 15, 2016. Posted in Life. Leave a Comment

We are currently halfway through the first month of this new year and to be honest, I started the year with no clue of what I wanted. All I could think about was recovering from last year. That was my one goal. It’s taken me a little longer than I’d hoped but I finally have some clarity and a vision for the year ahead. I have six goals, five I’ll share publicly with you all.

Written by Shakira on January 12, 2016. Posted in Personal Style, Style. Leave a Comment 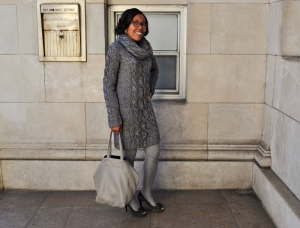 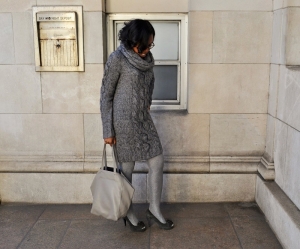 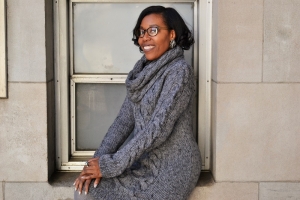 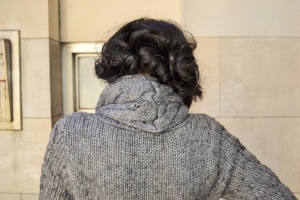 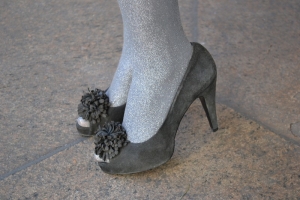 We’re in the second week of the new year and I pray things are starting well for you all. Lately I’ve really been into chunky knits and suede. These are winter staples that always deliver both style and functionality, perfect go tos for any chic woman. Today’s look features one of the warmest items in my wardrobe, this cable knit sweater dress. I’ve paired it with sparkly tights and suede heels to add dimension to the overall monochromatic look. Stay chic and stay warm loves!

Written by Shakira on January 7, 2016. Posted in Inspiration, Life. 2 Comments

December 31, 2014 I stood in watch night service at church with my family earnestly making declarations for the coming year. 2015 was to be the year I got married, the year I released a short EP, and my year of debt cancellation. Not one of these actually happened. In many ways 2015 absolutely sucked…but it was also the best year of my life! If I could sum it all up in one word it’d be correction. In many ways I’m a control freak and as such, my perfectly made plans became more important than my relationship with God. I began ignoring the holy spirit and charting a new course without my navigator. As a result, God demolished the idols I’d made of weddings and stages, forcing me to confront my fears and character flaws. For this reason, the events of the past year had to happen. They were pretty painful but they produced good fruit. As a result, there are things that I’ve shed and left behind me…

Well loves, I hope this has been insightful and encouraging. Especially for those who’ve experienced a much different 2015 than expected. I look forward to sharing more inspirational content rooted in my faith.  My hope is that my transparency is relatable to you. Let’s get ready for a much better 2016!  XO, Kira

Written by Shakira on January 4, 2016. Posted in Personal Style, Style. Leave a Comment 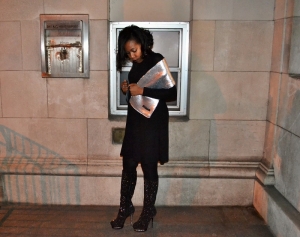 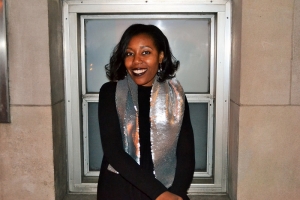 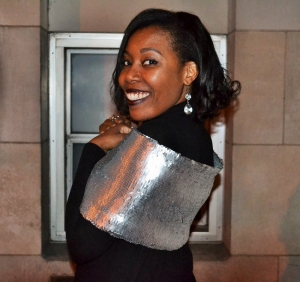 No matter what you’ve experienced in 2015 I hope it made you stronger and wiser. I’ll be sharing my personal reflections on this past year along with my goals for 2016 all week on the blog, so meet me back here for that conversation. To kick off the first full week of the new year I’m starting with a style post! I spent my NYE in my favorite place as usual, church. Every year my family spends that evening in worship with our church family bringing in the new year with praise and gratitude.